Hey All! It’s the second day the week, so you know what that means… it’s Running Tuesday – hooray! I want to put it out there that it may seem like I’m a big copycat, seeing as that I talk about Running Tuesday weekly on NN on the Run, and it’s a Skinny Runner trademark, but that’s not entirely the case. It was never my plan to inherit Running Tuesday, but well… since I love running and I love Sarah, it just sort of happened. Speaking of Skinny Runner, I want to congratulate her on running an amazing 9th marathon in NYC!

Thinking about this week’s Running Tuesday and the recent NYC Marathon gave me the idea of the Superwoman Series. Basically, I’ll dedicate a post to an inspiring female athlete. First up: Skinny Runner.

A few of SR’s inspirational qualities:

1. She’s run 9 full marathons since her first in December 2009 and 19 half-marathons total.

2. She rocks the running skirts and compression socks like nobody’s business.

3. She takes photos while running like a cheetah – mad props.

5. Her blog is a total hoot! I love her sarcasm. 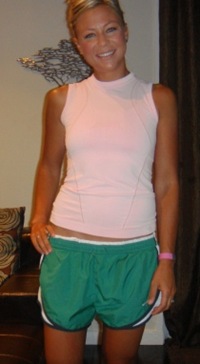 After yesterday’s rest day, I’m hoping to slip on my Asics today for a run – indoor, outdoor… something. If you don’t hear from me later, come back manana. It’s a VERY special day around here.

Now go get your run on!

Do you read Sarah’s running blog? If not, you should!

Who is a superstar to you? Share the love!