Today I am at a journalism conference, or something of the like, for an assignment in my Writing for the Mass Media class. I’d much rather be running, baking a batch of muffins to share with the roommates, or catching up on missed pillow time more than the former, but since I’ve got to be in academic writing/journalism mode early this morning, I thought I’d share a recent example of my work for said course [a short observation piece].

Putting procrastination to the test – something us university students seem never to pass – I sauntered into my most frequently-visited downtown establishment, Starbucks, to finish my tasks. There I escaped the frigid February temperature outside as I sat sedentary for the better half of late morning making progress towards crossing off said assignment from my epic to-do list. While sipping a 16-ounce soy latte, I encountered:

A line of caffeine-dependent students adorned with heavy, bulging backpacks awaiting their turn to order four more hours of energy.

A wall of rust-colored bricks that created a cozy compliment to the warmth of my coffee.

The soft salt and pepper hair of a faintly familiar mother of a distant friend.

Sugar packets taken for granted as they are shaken, ripped open, and dumped into the bum’s beverage… one after another.

The comfort of cinnamon-spiked foam as it teased my tongue with the last sip from my white cardboard cup.

A young girl – no more than 3 feet high – skipping jubilee across the hardwood floor enjoying every bite of her pastel pink frosted doughnut.

Several laptops and an iPhone in charging mode.

A friendly wave as one curly blood beckons a second curly blonde.

A creepy laugh, followed by an unhealthy cough, of a poorly-dressed man organizing his pocket change with dirty fingers.

The clunk from the firm closure of the cash register as recycled money slips in and out.

The constant smile of the slender girl behind the counter, dressed for business in all black.

Mouth-watering words scribbled in white chalk upon an ebony board: “enticingly complex with a lemony flourish and dark cocoa notes.”

A draft of cool air from an anonymous spot in the embossed ivory ceiling.

An obnoxiously sweet scent of caramel counteracted by the bitter aroma of roasted coffee beans.

The pronounced announcement of another pair of stylish winter boots stepping across the dark, dull floor.

A glare on the local wall art from the rising 11:00 a.m. sunshine seeping in the storefront window.

Two hustling espresso machines, antique in their rosy color, modern in their capabilities.

Crumbs of coffeecake decorating the space underneath my slightly sticky round table. 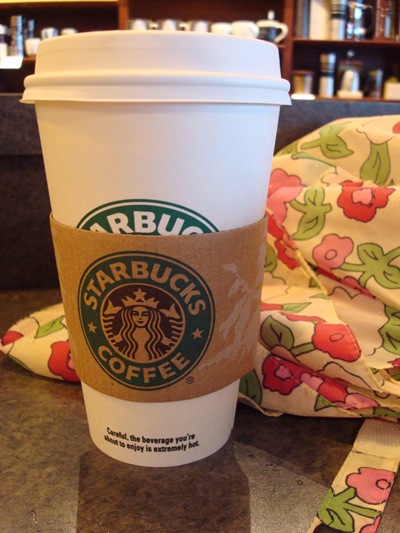 What is a hobby of yours that you’ve always enjoyed?